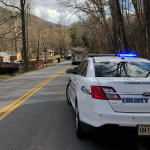 Roanoke County fire crews are currently working to douse a forest fire off Bradshaw Road in the Mason’s Cove area. Fire officials say as of 4:45 pm, the blaze had burned about nine acres of steep and heavily-forested woodland. No homes or other structures are threatened. Police say as a result of the fire, Bradshaw Road is down to one lane in the 2900 and 3000 blocks. In addition, say police, traffic is also limited to residents only on Forest Acre Trail.

From Roanoke County Fire & Rescue: Crews are currently on the scene of a forest fire in the Masons Cove area of the County . The call was dispatched at about 2:30 p.m. When firefighters arrived, they reported a forest fire in the area of Forest Acre Trail and Forest Acre Court off of Bradshaw Road. No homes or other structures are threatened at this time. Firefighters are working to dig a containment line completely around the burning area. At this time, approximately nine acres have burned and the fire is about 70% contained. The area that is burning is heavily wooded and steep terrain which makes it difficult for crews to move fast. The Virginia Department of Forestry is on scene with a bulldozer to reinforce the containment line.