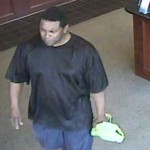 Roanoke Police have released a bank surveillance photo showing the man they say held up the Valley Bank branch this morning on Hershberger Road across from Crossroads Mall. Police say he handed a note demanding money, got the cash and took off on foot. We do not know how much money was taken. No one was hurt, and police say no one has been arrested yet.

Here is the full Roanoke Police news release:
Roanoke, VA- The Roanoke Police Department is investigating a robbery that occurred on June 1, 2011.  Officers responded at 10:44 a.m. to the Valley Bank located in the 1500 block of Hershberger Road.  Witnesses state that the suspect entered the bank and handed the teller a note demanding money. The suspect obtained an undisclosed amount of money and fled.  He was last seen traveling on foot, eastbound on Hershberger Road.  No one was hurt. No arrests have been made.  The suspect is described as a black male, between approximately five feet six inches and five feet nine inches in height.  He weighs approximately 220 pounds and has short black hair.  He was wearing a black mesh shirt and long blue shorts.  Anyone with information regarding this or other crimes should call the Roanoke Police Department at 853-5959 or Crime Line at 344-8500.  Crime Line may offer a monetary reward for any information leading to an arrest.