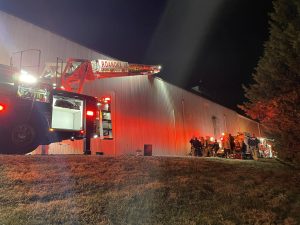 Roanoke fire officials say smoke and flames caused an estimated $2 million in damage at Bimbo Bakeries. That is in the Blue Hills industrial area off Orange Avenue. Crews were summoned to the commercial bakery last night and arrived to find heavy smoke coming from the facility’s freezer. They were able to quickly control the flames. Officials say the fire started after nearby welding ignited combustible materials, and three workers were evaluated on site for minor injuries.

NEWS RELEASE: Last night [Wednesday] around 8 p.m., Roanoke Fire-EMS was dispatched for reports of a structure fire at a commercial facility [Bimbo Bakeries]. Arriving crews found heavy smoke upon investigation of the building, and located a fire in the facility’s freezer, where it was contained and ultimately extinguished. Three civilians were evaluated on site for minor injuries. No injuries to Fire-EMS personnel were reported. The Fire Marshal’s Office has determined that the fire was caused by the ignition of combustible materials from welding nearby, and deemed it accidental. Damages to the structure and its contents are estimated to be $2,000,000.