Roanoke Amtrak passenger numbers are way up from pre-pandemic 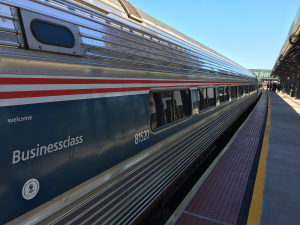 State passenger rail officials are pronouncing the second daily Amtrak round-trip to Roanoke a clear success — with numbers to show it — less than three months after its arrival. The additional service started operations July 11th, and in August, more than 28,000 rode the two trains between Roanoke and Washington D.C. That number is up almost 44% from the same month in 2019.  The percentage increase over the last three years tops any other state-supported Amtrak service to Richmond, Newport News or Norfolk. WFIR’s Evan Jones has more: