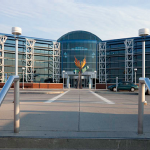 September was another good month at Roanoke-Blacksburg Regional Airport, continuing what has been a good year. September traffic was up 5% from the year before, and for the first nine months of the year, passenger counts are up more than 7%.

News release: The Roanoke-Blacksburg Regional Airport continues to see 2018traffic increase with September traffic up 5.0% ona year over year basis. September 2018 saw 52,860 passengers fly via ROA compared to 50,313 in September of 2017 an increase of 2,547 passengers. Strong community support, an improved regional economy and airline operational reliability have all played roles in the continuation of sustained passenger growth, which began in September of 2016. September 2018 saw 5.0% passenger growth over September 2017. Year to date 2018 traffic is up 7.1% versus 2017, which equates to 32,178 more passengers. At this pace the airport is on track to have its busiest year since 2007. “We are pleased to see this positive trend continue through the summer of 2018, especially given our strong traffic numbers in 2016 and 2017,” stated Timothy T. Bradshaw, A.A.E., executive director of the Roanoke Regional Airport Commission. “Passenger demand is a critical factor when speaking with airlines regarding improving and increasing air service to our region. Our customers are using our existing air service and the carriers have taken not e. We appreciate the support of our community choosing to fly ROA. Between our traffic growth a nd Small Community Air Service grant we are hopeful of obtaining additional air service”. The   Commission continually works with the airlines to improve reliability, reduce air fare and upgrade equipment serving the region. This has played a significant role in the increase of passengers using the airport. In addition, the commission has invested resources to promote the services available at ROA and sincerely thanks our customers for choosing to fly ROA.