Protestors to RGC: don’t raise rates because of MVP investment 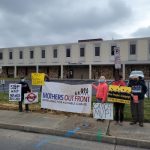 Several grass roots groups including Mothers Out Front and the Star Women’s Club were protesting outside the Roanoke Gas Company office on Kimball Avenue this morning. They say RGC Resources is passing along investment costs in the Mountain Valley Pipeline to its customers. A news release from Mothers Out Front Roanoke also claims a coalition of 30 organizations is appealing to MVP investors to cancel the project – which has been delayed and is over budget. Reverend David Denham spoke on behalf of the Southwest Virginia Poor People’s Campaign:

Roanoke Gas says in a news release it neither can nor would use MVP to scam its customers, and such allegations are “patently false and misleading.” The utility calls those claims “misinformation and mischaracterizations” about RGC, the MVP and state and federal regulatory agencies.