President Trump is expected to put forth SCOTUS nominee soon 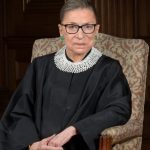 (from ABC News) President Trump is expected to put forth a nominee to fill Ruth Bader Ginsburg’s seat on the Supreme Court in the coming days, multiple sources close to the president and with direct knowledge of the situation told ABC News.

The sources describe the list of potential nominees as very short and including at least one woman. U.S. Circuit Judge Amy Coney Barrett is seen as a leading contender, two sources tell ABC News. Trump was asked about Ginsburg’s death after leaving his Friday night campaign rally in Minnesota and said he was not aware of her passing. The 87-year-old justice died Friday after a battle with pancreatic cancer, the court announced.

Sources added that Senate Majority Leader Mitch McConnell has already been in touch with members of the Republican caucus after news of Ginsburg’s passing was announced. The Senate needs just a simple majority to confirm a nominee, with Republicans currently holding 53 seats. McConnell refused to bring then-President Barack Obama’s nominee to replace Antonin Scalia in 2016 — Merrick Garland –  to the floor for a vote, but said he will not do the same this time.