Roanoke County Police hope a surveillance photo will lead them to a thief, a photo that shows her returning a wallet and claiming she just found it. Police say the woman lifted a wallet from an unattended purse at the Brambleton Avenue Bojangles’s restaurant in late July, took out a credit card and some other items and then went a cash register and told a worker she’d just found it in the bathroom. Police said the woman used the credit card at some nearby businesses. 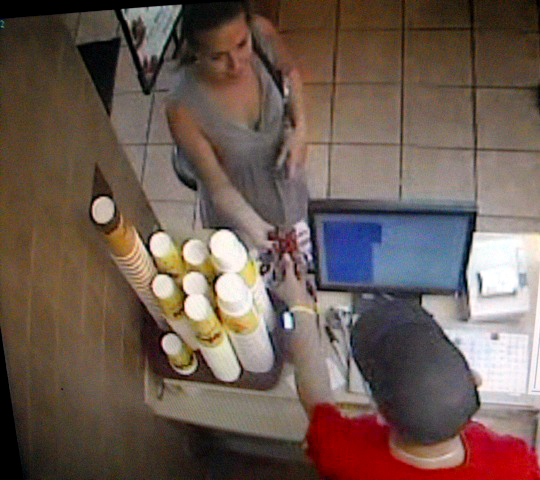 The Roanoke County Police Department is asking for the public’s help to identify a female suspected of stealing a woman’s wallet and subsequently using the victim’s credit card at two Roanoke County businesses.

The theft of the wallet occurred on July 24 at the Bojangles restaurant on Brambleton Avenue sometime between 12:30 p.m. and 3:30 p.m.

Surveillance video from the restaurant shows the suspect handing the wallet over to the employee at the cash register. The stolen credit card was subsequently used at two businesses in the vicinity of Brambleton Ave.

The suspect is described as a slender white female, possibly in her late 20’s to early 30’s, with long blonde hair. She was wearing a sleeveless gray-colored dress and carrying a large purse. Police have been told the suspect may work as a day-provider for mentally challenged adults.

If you have any information on the female’s identity, please contact Roanoke County Police Detective A. Morris at 540-777-8635.