Police: Slow car with no lights on started fatal I-81 chain reaction crash

Virginia State Police say an unsafe lane change by a slow-moving vehicle without its lights on started the chain-reaction crash Wednesday on I-81 that killed a Texas truck driver and closed the southbound roadway for almost 10 hours. It happened about 10 miles north of Lexington in Rockbridge County. Police say the crash investigation is a complicated one and not yet complete.

NEWS RELEASE: The crash occurred at 6:11 a.m. at the 198 mile marker on the southbound side of Interstate 81.  A 2015 Honda Civic made an unsafe lane [change], moving from the left lane to the right lane, traveling at a low speed and driving without lights.  The Civic was struck by a tractor-trailer which then jack-knifed, and was then struck by multiple vehicles and tractor-trailers.  Eight vehicles were involved, 4 tractor-trailers and 4 passenger vehicles. 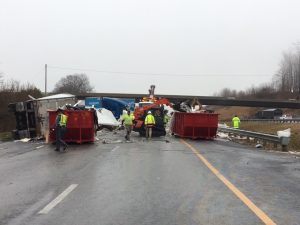 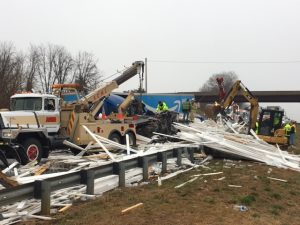 There were injuries in all the vehicles involved and at this time[we] do not have the total count.  The injured were transported to multiple hospitals for a range of injuries.
The Interstate, at that location, was closed at the time of the crash and remained closed for a large part of the day, as crews worked to clear the debris and spilled diesel fuel which covered the roadway for at least two tenths of a mile.  Two of the tractor-trailers lost their loads during the crash, which also complicated the clean-up efforts.
The road was closed at the time of the crash (6:11 a.m.) and remained closed until 3:57 p.m.  VDOT set up a detour at Exit 200 to move traffic to Route 11, then to re-enter the Interstate at the 195 mile marker.
The Virginia State Police Crash Reconstruction Team, Motor Carrier Team and the Bureau of Criminal Investigation assisted with the crash to determine the sequence of events in the crash.
The crash remains under investigation.