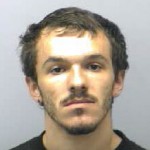 Roanoke police say they have arrested s suspect for assaulting a jogger this week on the Roanoke River Greenway along Wiley Drive.  Police say 23-year-old Brett Halsey turned himself in this afternoon. Halsey is charged with assault and battery.

From Roanoke Police: The Roanoke Police Department has arrested Brett Matthew Halsey, age 23 of Roanoke. Mr. Halsey has been charged with assault and battery in an incident that occurred on December 13, 2011. Officers responded on that date at 9:38 a.m. to the 1100 block of Wiley Drive. Upon arrival, they located an adult female who stated that she was jogging when she was approached by an individual who began jogging beside her. The victim stated that the individual then took his hand out of his pocket and was holding something black. She advised that the suspect grabbed her pants leg as she fled towards two City of Roanoke employees who were in the area and called 911. The victim was not hurt. Through the course of the investigation, officers identified the suspect as Mr. Halsey. Mr. Halsey turned himself in to police on December 16, 2011.