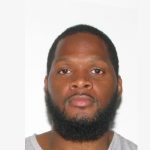 UPDATE: Roanoke Police say a man previously thought to be involved in a shooting over the weekend is no longer a suspect. Officials say further investigation revealed Tyriek Jordan was not involved in the incident on May 12th that started after a fight outside the city market building. Investigators say they are looking for another man who they believe was involved.

News release: Roanoke Police are asking for your help locating Tyriek Jordan. Based on information obtained in the May 12, 2019 downtown shooting investigation, Roanoke Police have obtained a charge of malicious wounding for Javoun Jordan, 29 of Roanoke, and also a charge of malicious wounding for Tyriek Jordan, 30 of Patterson, NJ. Javoun Jordan turned himself in to Roanoke Police on May 14, 2019 and is currently in the custody of the Roanoke Sheriff’s Office. Anyone with information concerning the location of Tyriek Jordan is asked to call (540)344-8500 and share what you know. You can also text us at 274637; please begin the text with “RoanokePD” to ensure it’s properly sent. Both calls and texts can remain anonymous.