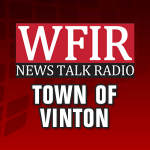 UPDATE: A driver who allegedly tried to flee a traffic stop in Vinton yesterday before crossing through a yard during the pursuit and striking a home in the 300-block of Elm Street has been identified. Officials say 41-year-old Randy Niday of Roanoke faces multiple felony charges including child endangerment. Policee say Niday had a 13-year-old family member in his vehicle during the pursuit and crash.  Other charges include drug and firearms counts along with driving while his license is suspended.

PREVIOUS: Vinton Police say a driver who tried to flee a traffic stop this afternoon crossed through a yard during the pursuit and struck a home in the 300-block of Elm Street. Officials say the man driving the pickup tried to flee on foot, but he was caught. His name has not yet been released.

From Vinton Police:  On April 3, 2018 at approximately 1545 hours an officer of the Vinton Police Department initiated a traffic stop in the 800 block of Morrison Ave.  The vehicle, a white 1997 Dodge Ram pick up, truck fled from the officer West on Morrison Ave.  The vehicle continued on Polk Ave., crossing N. Blair St., and crossing through a yard where the vehicle struck a home located in the 300 Block of Elm St.   One adult male driver attempted to flee on foot and was apprehended.  A second subject, a juvenile, also fled on foot but later returned to the scene.  The juvenile was turned over to a guardian.  There were no injuries related to this incident.  This incident is still under investigation, and charges are still pending at the time of this release