On June 30 Roanoke police responded to a business in the 1400 block of Hershberger Road NW to investigate a report of a peeping tom. A 20-year-old woman told officers she noticed the suspect peeking at her while she was trying on clothing in the dressing room. The suspect was described as being bearded, under 6 feet tall, wearing a white cap and red shirt and appeared to be in his 40’s. You can see a picture on-line at wfirnews.com. 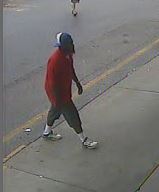