Police: Lawyer who got $20K on ‘Ellen’ gave drugs to inmate 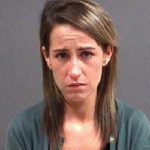 RICHMOND, Va. (AP) – A Virginia lawyer who gained national attention when she was rewarded with $20,000 on “The Ellen DeGeneres Show” for helping juvenile offenders has been charged with smuggling drugs and a cellphone to an inmate. The Richmond-Times Dispatch reports that Dana Tapper of Richmond was indicted by a grand jury last month. In 2013, DeGeneres recognized Tapper for volunteering her time outside of her classes at the University of Virginia School of Law to help minors transition out of juvenile detention centers in Virginia. On the show, Tapper received two checks totaling $20,000 from the online photo service Shutterfly. Tapper is accused of providing an inmate at Riverside Regional Jail a cellphone and drugs in December. Her attorney, Craig Cooley, declined to comment to The Associated Press when reached by phone.