The surveillance photos are somewhat indistinct, but Roanoke County Police hope they will help lead them to two men who held up a McDonald’s restaurant. The two walked in to the Oak Grove McDonald’s around 10:30 pm Sunday, displayed weapons, and got away with some money. There is no word on how much was taken in the holdup. Roanoke County Police released surveillance photos today. The images are not sharp, but police hope it might help someone identify the men.  The two may also be connected to an attempted holdup 80 minutes earlier at the Kangaroo station near Starkey Road. (Continue reading for photos and more information.) 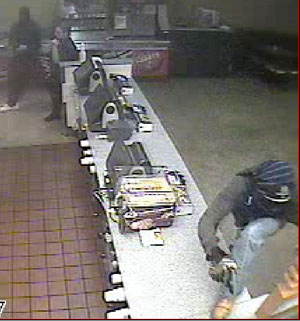 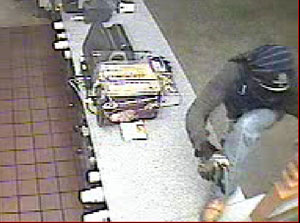 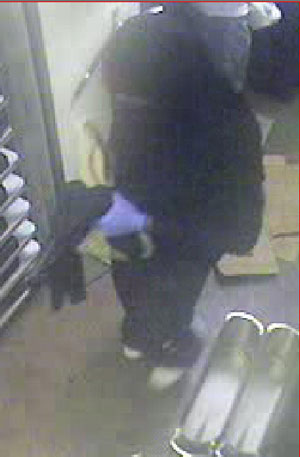 Background: On 8-14-11 at 2115 hours, Roanoke County officers were called to the Kangaroo located at 3919 Electric Road in reference to an attempted robbery. The subjects were described as 2 black males. The subjects displayed weapons. After assaulting a Kangaroo station clerk, the subjects fled on foot. The clerk was injured but was not transported to the hospital.

On 8-14-11 at 2235 hours, Roanoke County officers responded to the McDonald’s located at 2071 Electric Road in reference to a robbery. The suspects were described as 2 black males, both displaying weapons.  The descriptions of the subjects were similar to the descriptions provided of the suspects in the attempted robbery at the Kangaroo station earlier in the evening. The suspects left on foot with an undisclosed amount of money. No persons were injured in the second robbery. If anyone has any information regarding either robbery, to include suspicious vehicles or persons in the area prior to the robberies, please contact investigators.

UPDATED INFORMATION:  On August 16, the Roanoke County Police Department released images captured by a surveillance camera shortly after the two suspects entered the restaurant. One of the images shows both of the men just moments after they entered the McDonalds and ordered the staff to the back of the restaurant. The remaining two pictures are individual images of the suspects.

Suspect one, who can be seen jumping over the front counter, is a black male approximately five feet two inches tall. He was wearing a dark colored jacket, blue jeans, and and what appeared to be light brown colored boots or shoes. He had a blue cloth of some sort wrapped around his head and face. Suspect one can be seen holding what appears to be a handgun in his right hand.

Suspect two, also described as a black male, is the taller of the suspects. His height is estimated at five foot ten or eleven. He was wearing dark colored clothing, white tennis shoes, and blue gloves. He was also wearing a dark colored cloth over  his head and face. He was also carrying a firearm that was partially concealed by some type of cloth. Crimes of this nature are rare in Roanoke County.

If anyone has information about this case, please contact the Roanoke County Police Department at 540-562-3265.