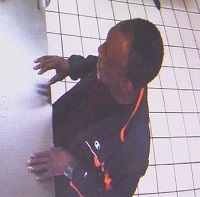 From Roanoke City Police: On April 23, 2016 at 1:13 a.m. Roanoke Police responded to a report of an attempted robbery at the Papa John’s in the 4500 block of Williamson Road NW. The suspect, seen in the attached photo, had already left the scene on foot before officers arrived. A Papa John’s employee told officers the suspect walked into the business and demanded money from the cash register.  The employee said the suspect displayed a large knife. The suspect left the store without obtaining any money or property. He’s described as being between 5’8″ to 5’10” and weighing approximately 160 lbs. Anyone with information can call our tipline at 540-344-8500.  Calls can be anonymous.  You can also send an anonymous text message to CRIMES [274637]. Please start your text message with the keyword RoanokePD: to ensure that it’s properly sent.