Plane makes emergency landing on I-77

From Virginia State Police:  At 1:12 p.m. Wednesday (Sept. 10), Virginia State Police were called to the scene of a plane crash along Interstate 77 near the 5 mile marker in Carroll County, Va. A 1939 J3 single-engine aircraft was flying south along Interstate 77 when it came in contact with some of the tree tops in the median and crash landed into the mountain that makes up the median of I-77 at Fancy Gap. The plane never made contact with the interstate.  The 67-year-old pilot was transported to Baptist Medical Center in North Carolina for treatment of serious but non-life threatening injuries. He was the only occupant of the aircraft.  The area of the crash was experiencing dense fog and limited visibility in the area at the time of the crash. Visibility on the ground was approximately 500 feet. The cause of the crash remains under investigation. Both the FAA and NTSB have been notified.  Only one northbound lane of I-77 is closed to through traffic at this time. 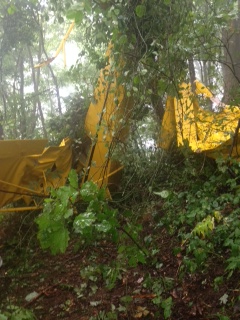 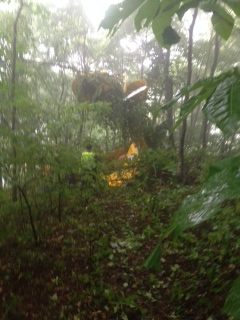