UPDATE: Driver charged after pickup falls from I-81 bridge 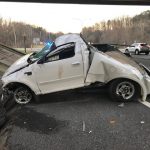 UPDATE FROM STATE POLICE: Virginia State Police Trooper C. Viera-Cintron is investigating a single-vehicle crash in Roanoke County. The crash occurred Feb. 24, 2019, at 5 p.m. on Interstate 81 at the 140 mile marker. A 1999 Ford F-150 was traveling north on I-81 when it ran off the left side of the interstate and continued into the media. It struck the concrete barrier guardrail along the southbound lanes of I-81 at the overpass, became airborne, and landed below on Route 311…which runs underneath I-81. The driver, Quinton A. Smith, 24, of Troutville, Va., was ejected from the vehicle onto Route 311. He was transported to Roanoke Memorial Hospital for treatment of serious injuries. Smith was charged with reckless driving, as speed was a factor in the crash.