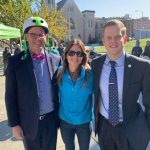 (Roanoke resident Luke Priddy seeks to have the Roanoke City School Board elected – not appointed by City Council, and recently mounted a petition drive)

ROANOKE – I believe in an elected school board, but first, we need to get it on the ballot. Sadly, I do not see that happening this November.

In April, petitions were approved for circulation in the City of Roanoke for a November referendum to change the selection of school board members from appointment by the governing body to direct election by the voters. In May, alternate electronic petitions were approved to collect signatures online, and in June, I launched “Roanoke Votes” with parents, teachers, and community leaders to engage the public in discussions about why it is so necessary to let the voters decide how the School Board is selected: either appointed or elected.

Today, with two-thousand signatures on hand, I recognize that I will not have enough by the deadline to place this question on the ballot this November. The path to a referendum is arduous. Over six-thousand, five-hundred registered voters in the City of Roanoke would have been required to sign the petition by July 14. The same number of voters cast ballots in the Democratic Primary this June, however, my volunteers were not able to capture every single one. Additionally, the alternative method to collect petition signatures electronically was limited to the duration of a State of Emergency, which expired on June 30. This development coupled with the inability to reduce the amount of signatures required has made this an impossible task to complete by the deadline.

While the path to a citizen-led referendum is arduous, I want to stress that Roanoke City Council possesses the authority to bring this question to the voters as a proposed change to the charter. The results of a citizen-led referendum would have been binding, but any change to the charter pursued by Roanoke City Council would require confirmation by the General Assembly. I believe that either path to the ballot requires leadership from City Council with continued demands from the public to let the voters finally answer this question after three decades and now three citizen-led initiatives.

I am proud of the public for positively engaging in this conversation, a conversation that must be kept alive every time that Roanoke City Council considers applicants for School Board. In the future, I hope that City Council will be encouraged to forgo closed-door discussions and instead deliberate publicly on applicants. But ultimately, that is up to them to decide.

Elect of Appoint? One day, Roanoke voters will finally have the opportunity to answer this question, and hopefully, they will get the opportunity to select members of School Board themselves. But now is the appropriate time to announce a pause for this effort. On July 1, three School Board Members began their terms of service. I want the public to place their faith in them to effectively govern and to engage with them positively and professionally throughout their tenure. Appointed or elected, each of them have made sacrifices and are dedicated to serving the people of Roanoke.