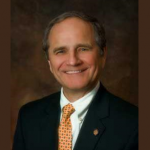 Three people are running to represent the Cave Spring District on the Roanoke County Board of Supervisors. We will hear from all three in the next two weeks, and we started with former long-time Roanoke County Attorney and Republican candidate Paul Mahoney. The conversation touched on issues that included the future of the Tanglewood area, economic development, and whether Roanoke County is losing the “coolness factor” to the city. WFIR’s Evan Jones has the story:

Here is the full conversation:

We will hold similar live conversations with Independent Stan Seymour on Thursday and with Republican Brian Powell next Monday.