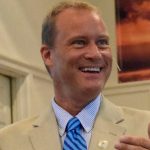 In flood-ravaged Houston, toys for kids might be the last thing on the minds of many parents at this point. But the senior pastor at CommUnity Church in Salem, Tom McCracken, wants to change that a bit – by collecting at least 250 new bicycles and sending them to Houston as Christmas presents. Starting Monday morning he can be found on the roof of his church on East Main Street – until they collect all of those bikes. McCracken says CommUnity Church will also accept monetary donations during the “Wheels for Hope” campaign. He prays those bicycle donations will happen fast – saying that he “likes to eat.”