UPDATE: One lane open after tractor trailer overturns on I-81 N

UPDATE: One lane is now open on I-81 N in Rockbridge County after a tractor trailer overturned early this morning at mile marker 175 in the Natural Bridge area. Motorists should expect significant delays through this morning. Traffic is currently backed up about five miles.

Earlier Today: Virginia State Police say an overturned tractor trailer is blocking all lanes on Interstate 81 North at mile marker 175. Authorities say they should have one lane open in approximately 30 minutes. Crews are working to clear the load of lumber that was on the truck when it overturned. Traffic is backed up for approximately 8 miles. The first crash occurred at 4:15 a.m. and was followed by a second crash a minute later involving a Dodge. There was one non-life threatening injury in the second crash. The Subject was transported from the scene by EMS. The driver of the tractor trailer was not injured. 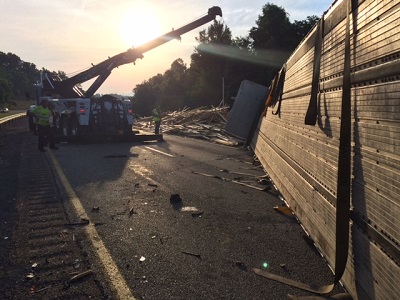 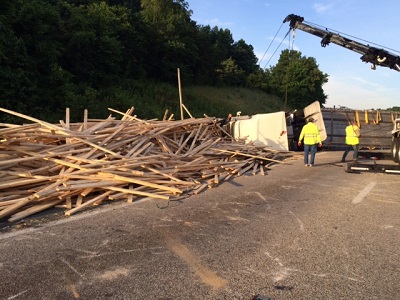