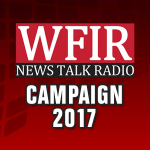 The Democratic candidate for governor, Ralph Northam, says he would sign a bill to ban any Virginia locality’s efforts to create a sanctuary city. Earlier this year, as Lieutenant Governor, Northam voted against a similar bill. But here is what he told WAVY television in Norfolk last night when asked if he would sign one like it now:

Northam’s tie-breaking vote earlier this year is the basis for ads from the Ed Gillespie campaign linking Northam to the Latino gang MS-13. Northam says the ads are negative, divisive and offensive to many communities in Virginia.