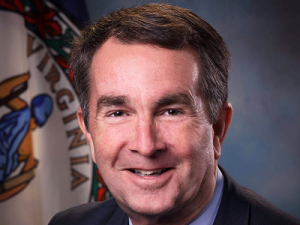 RICHMOND, Va. (AP) — Virginia Gov. Ralph Northam called on lawmakers Wednesday to raise teacher pay and give tax breaks to low-income families during his yearly address to the General Assembly. The Democratic governor also pitched the Republican-controlled legislature on decriminalizing possession of marijuana, extending high-speed internet access in rural areas and allowing no-excuse absentee voting. The grab-bag policy pitch comes as lawmakers kick off the 2019 legislative session. This year marks the 400th anniversary of the founding of the House of Burgesses in Jamestown, the New World’s first representative legislative assembly.

All 140 legislative seats will be up for election this year in contests determining partisan control of the assembly. That means many pieces of legislation — including those backed by Northam — are more likely to be used as ammo in political campaigns than actually becoming law. Still, Northam repeatedly called on lawmakers of both parties to work together, a word he repeated throughout his speech. “It can be tempting to retreat to our corners and shout at each other. But I believe we all have that internal moral compass, the one that guides us toward the right thing to do. I hope we all follow it this session,” Northam said.

The session is likely to be dominated by debate on tax policy. The 2017 federal tax overhaul is set to produce a multibillion dollar windfall in state taxes if tax rates and deductions go unchanged. Northam has proposed using the new money to pad the state’s rainy day fund and extend tax credits to families making $54,000 a year or less. The governor said state should target lower-income taxpayers because the benefits of the federal tax cuts are weighted toward the wealthy and corporations. “In Virginia, we can work together to restore balance and fairness on the state level,” Northam said.

Republicans, eager to win back suburban voters who have fled the GOP during Donald Trump’s presidency, have argued forcefully for returning most of the projected new money to taxpayers. They’ve called Northam’s plan a “hidden” tax on the middle class. “We will insist that state government balance its books without taking more of your family’s earnings,” said Del. Bob Thomas.

Virginia also has extra money to spend thanks to a stronger-than-expected state economy and increased federal defense spending. Northam has proposed boosting a 3 percent pay raise for teachers scheduled to take effect July 1, kicking it up to 5 percent.