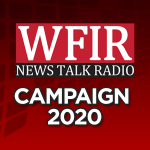 The latest statewide poll of almost 600 Virginia likely voters conducted by Roanoke College shows former Vice President Joe Biden with a 12-point lead over President Donald Trump ahead of the election this November. Meanwhile US Senator Mark Warner holds a 17 point edge over a yet-to-determined Republican opponent in his reelection bid. As for Governor Ralph Northam, his job approval rating soared to 59 percent in the just-completed survey, up from 40 percent in February. 29 percent of respondents disapprove of his performance.

(More details from Roanoke College news release) Former Vice President Joe Biden leads President Donald Trump by 12 percentage points (51%-39%) in Virginia according to The Roanoke College Poll. Each is viewed favorably by 36 percent of respondents, but Trump is viewed unfavorably by 49 percent while Biden’s unfavorable rating is 39 percent. U.S. Senator Mark Warner leads his undetermined Republican opponent (48%-31%). Warner’s favorable/unfavorable numbers stand at 37%/21%. The Institute for Policy and Opinion Research interviewed 563 potential Virginia voters* between May 3 and May 17 and has a margin of error of +4.1 percent. In what was then a hypothetical matchup, Biden led Trump 48%-40% in February. More than nine of 10 (91%) said they care a great deal who wins the presidential election in November, and 94 percent said it was very likely they would vote.

President Trump, Direction of the Country and Commonwealth, Governor Northam

A majority of Virginians (54%) disapprove of the way President Trump is handling his job, while just over one-third (36%) approve. That 36 percent figure matches the February Roanoke College Poll’s second-highest approval rating for Trump in the RC Poll since he took office.

A majority (61%) of respondents think the country is on the wrong track, while 33 percent think it is headed in the right direction, which is significantly more negative than the last measurement in February 2020. Three-fifths (63%) disapprove of the way Congress is doing its job. The 20 percent who approve of Congress matches its high in February 2020 and three years prior to that.