Northam: Limiting Thanksgiving gatherings is an act of love 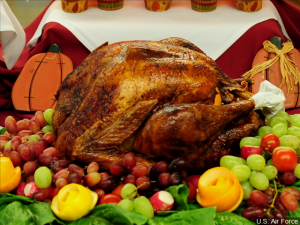 Governor Northam says Thanksgiving dinners without some loved ones at the table will be difficult, but he says it is a caring way that will ensure those close to you will be around to celebrate the holidays with you next year. Northam said at today’s briefing that staying in your own home is an important way to stop the recent resurgence of COVID-19. WFIR’s Evan Jones has the story:

RICHMOND, Va. (AP) — Gov. Ralph Northam on Wednesday urged Virginians to stay home for the Thanksgiving holiday, saying it would be “an act of love” to help keep people safe amid steadily rising coronavirus cases.

If people must get together, Northam said, they should keep gatherings small and celebrate outside.

“Let’s not make this winter any worse than it has to be,” Northam, the nation’s only governor who is also a doctor, said at a news conference.

The Democratic governor’s comments come a few days after he announced substantial new statewide restrictions on gatherings and certain businesses in an effort to slow rising COVID-19 cases and hospitalizations.

The state’s cap on gatherings is reduced from 250 people to 25, the mask requirement is applied to younger children, the number of spectators allowed at athletic events is reduced, and alcohol sales are prohibited at dining and drinking establishments after 10 p.m.

The changes come as the coronavirus is surging across the U.S. at what experts say is an alarming pace. Newly confirmed infections per day in the U.S. are shattering records at nearly every turn.

In Virginia, case counts have been increasing with particular intensity in the state’s southwest, where cases were sparse early in the pandemic.

Some of the state’s largest school systems — Virginia Beach, Henrico County and Fairfax County — have hit the brakes on reopening plans.

Collectively, Virginia is faring better than many other states, with one of the country’s lowest per capita rates of new daily cases. As of Wednesday, Virginia has reported more than 208,000 coronavirus cases and a death toll of nearly 4,000.

Northam also announced he had signed a revised state budget that imposes moratoriums on evictions through the end of the year and puts new limits on evictions starting next year.

A moratorium on utility disconnections also has been extended and requires Dominion Energy — the state’s largest electric utility — to forgive $127 million of customer debt.