Michael Brown arrested; Sheriff “thankful” no one was hurt 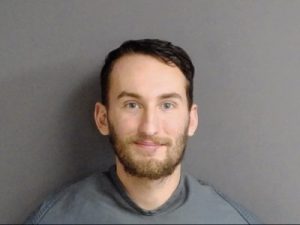 Franklin County Sheriff Bill Overton called it a group effort involving many law enforcement agencies – while announcing the arrest today of Michael Brown – wanted in the arrest of his mother’s boyfriend after he was shot and killed on November 9th. Brown was taken into custody this morning.  Overton said the “intense manhunt” encompassed three states – he was also “thankful” no one was hurt during the search for Brown, an AWOL Marine who was spotted outside his grandmother’s house in the Grandin area about two weeks ago. That led to a 1-day system-wide school lock down as a safety precaution. Here is the full announcement:

(From US Marshal’s Office) Press Conference relating to arrest of Michael Alexander Brown. from Acting U.S. Marshal Brad Sellers, Western District of Virginia and Franklin County – VA Sheriff Bill Overton will holds a press conference concerning the arrest of Michael Alexander Brown this morning at 11am at the Franklin County Sheriff’s Office in Rocky Mount. More details later.     (A sighting of Brown – an AWOL marine – in Roanoke several weeks ago after he allegedly killed his mother’s boyfriend led to a school lock down in Roanoke)