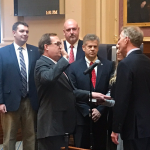 New 8th district Republican delegate Joe McNamara isn’t wasting any time. Before he even sits in on his first General Assembly session tomorrow, the former Roanoke County supervisor has introduced a bill – “HB 1980” – which would better align Virginia tax laws with changes enacted at the federal level last year. McNamara says his bill would make the tax code alignment revenue-neutral. He succeeds Greg Habeeb, who retired before his term was up this fall. McNamara also says he plans to run for reelection.