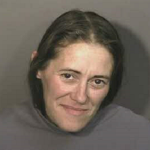 A Franklin County woman  is jailed and a man is wounded after a shooting in the Wirtz area. The sheriff’s office says it happened in the early morning hours yesterday. 45-year-old Kimberly Morgan-Lefever faces malicious wounding charges. Investigators say the bullet struck the 47-year-old victim in the hand and grazed his head, but the injuries are not life-threatening. Officials say the shooting followed an argument.

News release: On 1/7/19, just after 3:00 AM, deputies with the Franklin County Sheriff’s Office responded to a report of a gunshot wound at the intersection of Bonbrook Mill Rd. and Wirtz Rd. The caller was identified as 45-year-old Kimberly Ann Morgan-Lefever. Once on scene deputies were able to determine that an argument had ensued between Ms. Morgan-Lefever and 47-year-old male. Morgan-Lefever had fired one round which struck the male in the hand then grazed his head.  Morgan-Lefever has been charged with Malicious Wounding. The male was treated for non-life-threatening injuries. Morgan-Lefever is currently being held in the Western Virginia Regional Jail without bond. The case is currently still under investigation and additional charges may be pending.