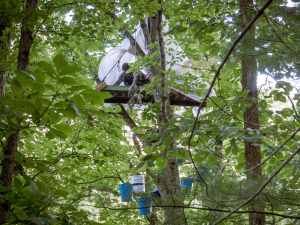 Two more Mountain Valley Pipeline protestors have set up tree sitting positions in the Elliston area of Montgomery County. Protest organizers identify them as 24-year-old wildlife biologist Lauren Bowman and a second protestor going by “Nettle”. This comes after federal regulators permitted pipeline construction to resume after a court-ordered review.

Here is a portion of our telephone conversation with Lauren Bowman:

Mountain Valley Pipeline Statement: “These unlawful blockades along the MVP route are creating unnecessary safety risks for everyone involved, including law enforcement, security personnel, project workers, and opponents themselves. While we continue to respect the opinions of those opposed to important infrastructure projects, the actions of these opponents are spending taxpayers’ money by forcing public agencies to incur significant expenses in order to maintain safety and uphold the law.

The MVP project includes two taps for local use in Virginia, including one that is near today’s unlawful activities by opponents. We remain committed to the safe construction of this project in order to meet the region’s demand for affordable, clean-burning, domestic natural gas.”

Appalachians Against Pipelines News release: Early Wednesday morning, two new tree sits were erected in the path of the Mountain Valley Pipeline in Montgomery County, VA. These blockades are protecting trees on the pipeline easement that have not been cleared, and are located within 5 miles of a site where the pipeline is proposed to cross the Roanoke River. Banners hanging at the tree sits read “WATER PROTECTORS, MOUNTAIN DEFENDERS, WE WON’T BACK DOWN” and “NO PRISONS, NO PIPELINES.” The pipeline fighters in the trees are Lauren Bowman, a 24-year-old resident of Montgomery County originally from Pulaski County, and a second protester going by Nettle.

“I am compelled to fight back against this pipeline because I cannot sit back and ignore what is happening to my home and to the mountains that I have known and loved since I was a child. I cannot sit back and watch as an extractive industry threatens this region, my family, and my community,” stated Lauren Bowman, a wildlife biologist. “The pervasive issues in our society that have allowed this pipeline project to come to fruition in the first place must be put to an end. We have put our trust in a system that has consistently failed to protect people.
“Choosing to protect the natural world is not a choice against job prosperity or ‘progress’ as some people call it. Environmental health and sustainability is not separate from the economy and our survival, but is an integral part of it. We are not separate from the environment and we would be nothing without it. The opposition against this pipeline, fracking, and other destructive practices is so much more than a ‘political issue.’ It is the health and prosperity of everyone and every living creature on earth.”
The Mountain Valley Pipeline, a 42-inch-diameter fracked gas pipeline, was first proposed in 2014. Pipeline fighters have been resisting this dangerous project all along its West Virginia & Virginia route for the past four years. Dozens of protesters have been arrested, fined, and cited for standing up to MVP in an effort to protect the communities and ecosystems the pipeline threatens. The tree sit erected today continues a series of aerial blockades that significantly delayed pipeline construction this past spring, including a tree sit on Peters Mountain that prevented tree clearing for 95 days.
“We must fight for ourselves. No one else will come to our aid in these times,” stated Nettle. “The cops will arrest us for our actions of self defense. The courts will side with private property and corporate greed, and every politician will continue pretending that the fate of the world on fire is up to bills, filibusters, votes, and campaign donations.”
Last month, MVP construction was temporarily slowed by a “Stop Work Order” issued by the Federal Energy Regulatory Committee (FERC) after a 4th Circuit U.S. Court of Appeals cancelled the permit that had allowed the pipeline to be built in the Jefferson National Forest. However, on August 29, FERC voted to reverse that decision, allowing full construction to continue on non-federal lands under the guise that continued construction is the only way to mitigate damage to the environment. Today’s action shows that pipeline fighters are not buying FERC’s machinations and are not backing down.