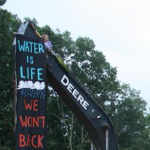 BRUSH MOUNTAIN, Va. (AP) – A Virginia Tech professor who locked herself to a piece of construction equipment to protest the Mountain Valley Pipeline has been removed and arrested. The Roanoke Times quotes Virginia State Police Sgt. Rick Garletts as saying Emily Satterwhite will likely be charged with trespassing. The Appalachian studies professor tied herself to a piece of equipment 20 feet above the ground Thursday morning on Brush Mountain in Montgomery County.
Police on cherry pickers cut her free Thursday night. Satterwhite waved to about 30 people gathered near the John Deere excavator as she descended and was met with cheers. Rick Garletts says Satterwhite was jailed after being checked by rescue workers. She had been warned that not voluntarily descending would end in her arrest. She said she would face the consequences.

PREVIOUS: (AP) _ A Virginia Tech professor has climbed atop a piece of construction equipment involved in work on the Mountain Valley Pipeline and locked herself to it. The Roanoke Times reports Emily Satterwhite took up her position on an excavator early Thursday on Brush Mountain in Montgomery County. Satterwhite teaches Appalachian studies and has been active in pipeline protests. State police, sheriff’s deputies and officials with the pipeline and the U.S. Forest Service arrived at the scene. According to the newspaper, they advised Satterwhite she would be arrested if she did not come down voluntarily. She responded that she was willing to face the consequences. Satterwhite’s demonstration is the latest direct action protesters have taken against the multistate natural gas pipeline. Earlier this year, a number of opponents stationed themselves in trees along the route.