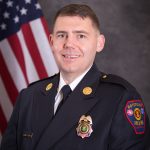 The new Chief of Fire and Emergency Medical Services in Botetourt County is a familiar face – after a 7 month national search the county stayed in house and promoted Battalion Chief Jason Ferguson to the top job. Ferguson came to Botetourt in 2001 as the county’s first staff paramedic. He was recently recently appointed by Governor Northam to serve a second term on the State EMS Advisory Board. A Botetourt County news release says Ferguson continued his education  by earning a Bachelor of Science from Jefferson College of Health Sciences and the Graduate Certificate in Local Government Management from Virginia Tech. In 2017, he received the Executive Fire Officer designation from the National Fire Academy.