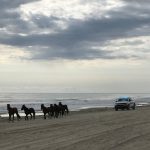 COROLLA, N.C. (AP) — A family of wild horses on North Carolina’s coast grew tired of the Tar Heel state and set out for Virginia. Again and again and again.

The family of six — made up of stallion Lucky Duck, mares Virginia Dare, Ocean Pearl, Bonita and Kitty Hawk and one yearling colt, Mateo — tried to circumvent the barrier fence separating their Carolina habitat from Virginia multiple times.

“For an intrepid horse, getting into Virginia is certainly possible, but over the past 15-20 years there have been very few instances of that happening,” Puckett said in the post.

But that’s exactly what the “Renegade 6” did.

Beginning in January, CWHF began hearing that the 6 were “making their way around (or up, over, or through) the northern barrier fence and into False Cape State Park in Virginia.”

But those journeys were dangerous for the horses, and for people, Puckett said.

“While we hoped that maybe it was just a one-time exploration, we were pretty sure that the horses were establishing patterns and territory up in Virginia,” Puckett said.

The horses were moved back to their refuge in North Carolina multiple times — even to its southernmost tip — but they kept making their way back north.

Puckett said stallion Lucky Duck is young and protective of his little herd, so he may have been “moving away from the pressure of other stallions.”

So CWHF had to come up with a solution.

Initially, they tried to get the volunteer-built fence extended — but the swampy marsh beyond where it stands now would be difficult and require a special contractor, Puckett said.

“Our mission is, first and foremost, to keep the horses wild, in their natural habitat, and we were hoping that this could be the case for the six that were starting to call Virginia their home. Unfortunately, the timing just didn’t work out,” Puckett said.

Virginia officials were concerned that the horses could end up in populated areas near Virginia Beach. The horses “were deemed a nuisance by the Department of the Interior” and CWHF “had no choice but to allow them to be removed and brought to our rescue farm.”

“We attempted to move them back to safer locations around Carova at least six or seven times, and each time they went straight back to False Cape in a matter of days,” Puckett told The News & Observer in an interview on Monday. “There was great concern that they’d continue to move north, and it’s only a couple of miles until they would have been in Virginia Beach proper. We still plan on extending the fence because we don’t want this to happen again — even if it’s not for another 20 years.”

The decision to move the horses from the wild was not one done lightly, Puckett told the N&O.

“It was truly heartbreaking. It’s almost like coping with a death, losing such a nice, young group of horses from the wild herd,” she said. “But knowing they’re safe now makes it a little easier. There were many times during their adventures that we’re lucky someone wasn’t seriously injured. It was a really stressful couple of months.”

Mateo, born in April of this year, was adopted by a family with two other rescued wild horses and other animals on a farm outside of Lexington, Va., Puckett said.

The rest of the family will be at the farm “for the foreseeable future” with plans to keep Lucky Duck as an educational outreach ambassador horse and a breeding stallion for the captive herd.

For more information on the Renegade 6, or to donate to their care, go to www.corollawildhorses.com.