National Guard: Officer’s APC use was not part of exercise 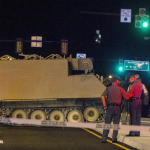 RICHMOND, Va. (AP) _ A spokesman for the Virginia National Guard is refuting an officer’s claim that he had been ordered by his brigade commander to drive an armored personnel carrier off base. 1st Lt. Joshua Yabut told The Associated Press he was following commands to take the vehicle as part of a training exercise to gauge the police response. Yabut was arrested in downtown Richmond late Tuesday night following a lengthy police chase, and is being held against his will in a psychiatric hospital. Guard spokesman A. A. “Cotton” Puryear says Yabut’s claim is not true. He says the officer was not authorized to drive the carrier off Ft. Pickett “to any location for any reason,” and that there was no exercise to gauge police response.