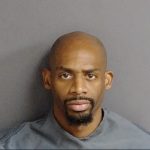 A Martinsville man is charged with the strangulation death last Friday of a Rocky Mount resident. Police say they were able to develop a suspect after finding the victim’s car at the suspect’s residence about 30 miles from the murder scene. 35-year-old Derry Finney faces a murder charge for the death of James Kirby — and he is charged with unauthorized use of Kirby’s vehicle.

NEWS RELEASE: ROCKY MOUNT, Va. – Rocky Mount Police Department investigators determined a weekend death to be a homicide and arrested a suspect late Thursday. The victim, James Edward Kirby, age 68, of Mamie Street, Rocky Mount, was discovered deceased at his residence just before 10 p.m. Friday, November 29. Kirby’s body was transported to the Western Virginia Medical Examiner’s Office for autopsy, where the coroner’s examination determined strangulation as the cause of death.

“Our officers and investigators have worked with other agencies to collect evidence, analyze data and determine whether an arrest was warranted,” said Rocky Mount Police Chief K.E. Criner. “Careful analysis of the Medical Examiner’s preliminary findings corroborated with evidence, and after questioning of a person of interest, our investigators have placed charges and arrested a suspect.”

Officers at the scene Friday determined Kirby’s car to be missing. The car was traced to a Martinsville, Va., residence early Saturday, and an occupant of that residence was determined to be in possession of the vehicle. That occupant was questioned and released pending further investigation, but was arrested Thursday on a felony charge of unauthorized use of a vehicle. Further investigation led to placement of the murder charge.

Officers arrested Derry Dee Finney, age 35, of Ridge Road, Martinsville, and placed felony charges against him for murder and unauthorized use of a vehicle. Additional charges may be placed pending continued investigation. A photograph is attached.

Finney is being held without bond at the Western Virginia Regional Jail.

Criner thanked other jurisdictions and agencies providing assistance on the investigation, including the Martinsville Police Department, Western Virginia Office of the State Medical Examiner, and the Franklin County Sheriff’s Office.