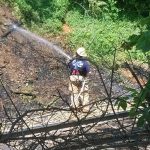 Roanoke County firefighters were busy for a while this afternoon extinguishing several brush fires alongside the Norfolk Southern tracks in the Tanglewood Mall and Starkey Road areas. While evidence suggests a passing train may have sparked the fires, there is no official confirmation yet, and in any event, they were all quickly extinguished once crews arrived.

News release: Roanoke County Fire and Rescue responded at approximately 12:40 p.m., on Tuesday, April 30, 2019 to the area of Starkey and Electric Roads, in the Cave Spring area of Roanoke County for the report of a brush fire along the railroad tracks. Upon arrival, crews determined that there were several small spot fires in the area and began working to extinguish them. More calls then came in for other fires along the tracks in the area of Windward Drive, Fallowater Lane, and Benois Road. Crews also responded to those locations and did find several brush fires along the tracks. There were no injuries and the only property damage was to a fence along Windward Drive. The fires were brought under control in about one hour. Crews from Cave Spring, Clearbrook, Back Creek, Mount Pleasant, Masons Cove, Vinton, and the City of Roanoke all responded to the fires.