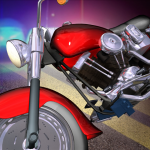 RICHMOND, Va. (AP) – Motorcycle-related deaths in Virginia sharply increased last year.
The Richmond Times-Dispatch reports that motorcycle deaths climbed by nearly 50 percent in 2017 compared to the year before.
There were 107 deaths in 2017. That’s the highest since 2007, when there were 126.
The Virginia Department of Motor Vehicles said it’s looking into what may have caused the increase. Some motorcycle enthusiasts say the increased use of cell phones by distracted drivers is causing the increased crashes.