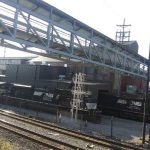 Four months after 130 other employees in Roanoke were furloughed, Norfolk Southern announced another round of layoffs this morning. That includes 47 at the locomotive shops and another 20 at Shaffer’s Crossing. That information came from a union official according to WDBJ-7. A subsequent statement from Norfolk Southern called the furloughs “consistent with the railroad’s organizational realignment.”