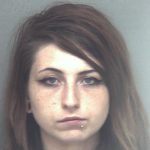 From the Montgomery County Sheriff’s Office: Our office received a 911 call early Saturday morning stating that an individual had been stabbed at a residence on Cattle Creek Path (Mountain Creek Mobile Home Community) in Elliston, VA. Deputies responded to the scene where they located 24 year old Christian G. Colwell deceased from what appeared to be a stab wound. Investigators from our office were called and responded to the scene. Following the preliminary investigation Colwell’s girlfriend, 21 year old, Taylor A. Stevers was arrested and charged with 2nd Degree Murder. She is currently being held without bond at the Southwest Virginia Regional Jail. The preliminary investigation indicates that the stabbing was a result of a domestic argument that had been going on between Colwell and Stevers. The investigation is on-going, no further information is available at this time.