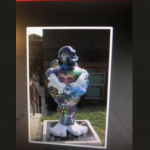 Blacksburg Police are looking for the person or persons who stole a Hokie Bird Statue that stood in front of the Tech Bookstore on South Main Street.The theft was reported early Thursday morning. Police say one dark SUV and two light ones were seen in the area at the time. The statue is one of many around Blacksburg.

News release: The Blacksburg Police Department is currently investigating a Larceny of a Hokie Bird Statue. On January 31, 2019, at approximately 3:30 am, a report was made to Blacksburg Police that “Carnival of the Mind” Hokie statue that was located in front of the Tech Bookstore, at 118 S. Main Street, was missing. Reportedly, there were three SUV’s in the area at the time of the larceny, one dark colored SUV and two white SUV’s. The Department is requesting anyone with information in reference to the larceny to contact the Blacksburg Police Department at 540-443-1400 or anonymously at (540) 961-1819 or by email at CIU@blacksburg.gov.