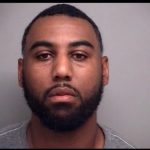 A Henry County middle school teacher is charged with sexting a 16-year-old. The sheriff’s office says 32-year-old Carlos Wade sent a sexually-explicit photo and messages to the juvenile. Neither person was on school property at the time. Wade was a teacher at Fieldale-Collinsville Middle School. He has resigned and is currently jailed without bond.

As of Friday afternoon, Wade’s teacher page remains visible on the Henry County Schools’ website. It says he has been teaching robotics since 2017 and is happily married with one child.

News release: On July 11, 2019, the Henry County Sheriff’s Office received information that a teacher at Fieldale-Collinsville Middle School was sending sexually explicit text messages to a 16 year old juvenile.  The investigation revealed that Carlos Raphel Wade, 32, of 225 Falcon Road Martinsville, VA sent a sexually explicit photograph and messages to the juvenile.  The messages were not sent nor received while either party was on school property.

Anyone having information regarding this or other crimes is asked to contact the Henry County Sheriff’s Office at 276-638-8751 or Crimestoppers at 63-CRIME (632-7463).  The Crimestoppers Program offers rewards up to $2500.00 for information related to crime.  The nature of the crime and the substance of the information determine the amount of reward paid.