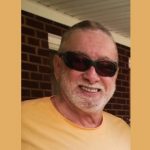 NEWS RELEASE: The Christiansburg Police Department is asking for the public’s assistance with locating a missing person.

Carl Dennis Alls, of Christiansburg, was last seen leaving his residence in Christiansburg on Sunday, Sept. 15, at approximately 7:30 pm. Alls told his wife he was going for a motorcycle ride with no particular destination and that he would be back in about an hour. He has not been seen or heard from since that time.

Carl Alls, 71, is 5’08” tall and weighs approximately 200 pounds. He has brown and gray hair, a beard and blue eyes. He was last seen wearing black shorts and a blue shirt. He was driving a 2010 red Honda GL1800 trike bearing VA license tag ‘NY2.’ Anyone who has information or who sees Mr. Alls is asked to contact the Christiansburg Police Department at 540-382-4343.