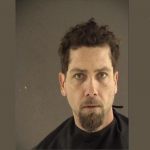 From the Bedford County Sheriff’s Office: On Thursday night at 10:07 p.m., Bedford County 911 received a call from a female advising she had received a call from her stepmother. The caller stated that her stepmother told her that the caller’s father had assaulted her. Bedford County Sheriff’s Office deputies responded to the residence on Woodshire Drive in Blue Ridge. After arriving on the scene, deputies made numerous attempts to get someone to come to the door. After several hours negotiations failed and a search warrant was obtained to enter the residence.

James Edward Lewis Jr., age 42, was arrested and charged with Felony Strangulation and Domestic Assault and Battery. He is being held in the Bedford Adult Detention Center on no bond.