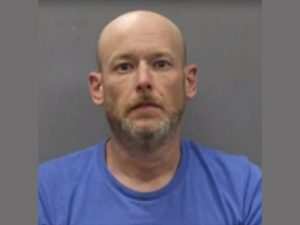 A North Carolina man was sentenced today to 17-and-a-half years in prison for seeking sexually-explicit photos and videos from teenage boys in southwest Virginia. Federal prosecutors say 41-year-old Jason Inman of Mount Airy used Snapchat to promise and personally deliver gifts like marijuana, money, and cell phones. Officials say there is no evidence of any physical contact between them.

NEWS RELEASE: ABINGDON, Va. – A North Carolina man, who used the popular social media messaging app Snapchat to solicit minors to send him sexually explicit photographs and videos in exchange for expensive gifts, was sentenced today to 210 months in prison.

According to court documents, Jason Kelly Inman, 41, of Mount Airy, N.C., used Snapchat to solicit minor victims living in Grayson County, Virginia, to send him sexually explicit photographs and videos of themselves. Inman targeted at least four minor, male victims, all who resided in Galax, Virginia, and ranged in age from 14 to 16 years old.

“This case demonstrates the lengths sexual predators will go seek out, win the trust of, and then victimize children. It also is a reminder of the dangers that exist for children online,” said Acting U.S. Attorney Bubar.  “I commend the hard work and partnership of the Grayson County Sheriff’s Office, the Virginia State Police and the FBI, which brought Inman to justice to face his heinous crimes and will ensure he can no longer victimize children.”

“Through our community outreach programs the FBI is committed to bringing attention to the dangers associated with online sexual predators and providing educational tools and resources for parents and educators to help keep our children safe,” Special Agent in Charge Stanley M. Meador said today. “FBI Richmond is appreciative of the dedicated efforts of our partners which led to the capture and successful prosecution of this predator.”

Inman admitted that between June 2020 and December 2020, his general pattern of behavior was to exchange messages with his victims using Snapchat and provide the victims with gifts, including alcohol, marijuana, vape cartridges, money, and cell phones. Inman would then turn the conversation toward sexual issues, eventually requesting and receiving sexually explicit photographs and videos from his victims via Snapchat, in exchange for the victims continuing to receive gifts.  Inman also traveled to Grayson County to deliver gifts to his victims.  There is no evidence of actual physical contact between Inman and the victims.