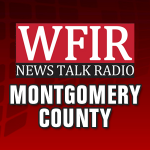 News release: On March 16, 2019, shortly after 7:00pm, the Montgomery County Sheriff’s Office was dispatched to the Big Falls area of McCoy, for a subject who had fallen off the cliffs overlooking the New River. According to witnesses, Curtis Rice, age 38, of McCoy, was attempting to attach a hammock to the rock ledge with a clamp. When attempting to check the clamp to insure it was secure, Rice lost his balance and fell between 40 and 50 feet. Rice was pronounced dead at the scene.