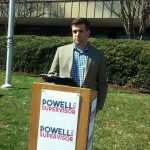 The owner of Wine Gourmet has formally announced his run for Cave Spring Supervisor. 33-year-old Brian Powell says he wants to move economic development projects like “Reimagine 419” in southwest County past the planning stage and into action. Powell is seeking the Democratic nomination in a district that skews Republican. No other Democrat has announced a run with the filing deadline at the end of the month. Paul Mahoney has announced his intention to run for the Cave Spring supervisor seat as a Republican. At a news conference outside the County Administration building today Powell was also critical about how the oft-delayed Cave Spring High School rebuild was handled. (George Assaid is not running for reelection this fall)