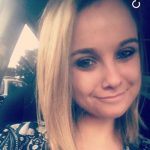 After 44-thousand likes and 27-thousand retweets, news of a former Roanoke City Social Services employee getting fired late last week spread quickly. 22-year-old Storm Durham claims she was escorted out of work by three police officers after supervisors said she was a safety risk …just for having a concealed carry permit. The city has issued a release saying the dismissal in question was not based on anyone exercising their second amendment rights. Ms. Durham spoke to WFIR Overnight Report Lillian Boyd about the incident and the aftermath of going viral.