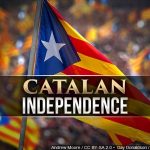 As early as today the Spanish region of Catalonia could deliver a unilateral declaration of independence from Spain. A local political analyst says President Trump can use that as a bargaining chip. More from WFIR’s Gene Marrano: