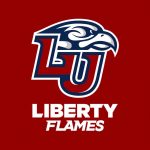 (from Liberty.edu) With alumni in the stands from all five decades of Liberty University history, the Flames rolled to a 41-13 Homecoming Weekend victory over Middle Tennessee, Saturday afternoon, at Williams Stadium. Liberty University, founded in 1971, welcoming its 50th anniversary alumni crowd back to campus during a special weekend to celebrate the school’s history.

The Flames did not disappoint their returning graduates, nearly doubling up the Blue Raiders in total offense (Liberty 449 yards; MTSU 265 yards). With the win, Liberty moves to 33-14 all-time during Homecoming Weekend games, including a 11-3 mark in its last 14 Homecoming contests. The victory also pushed Liberty’s home winning streak to 14 games in a row, extending its program record. Entering the day, Liberty’s win streak ranked as the fourth-longest home FBS win streak in the country.

Liberty came into the game as one of five FBS teams in the country without having a pass intercepted.  Demario Douglas posted his second 100-yard game in a row, leading all receivers with 10 receptions for a career-high 156 yards and his fourth touchdown in 2021. The Flames’ standout defensive, which held its fourth opponent this season below 20 points, was paced by Skyler Thomas, who finished with nine tackles (five solo, four assisted).