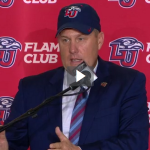 From Fox News: Liberty University head football coach Hugh Freeze was recovering from surgery this weekend after a life-threatening staph infection entered his bloodstream, according to a report.

Freeze, in his first year coaching the Flames, was forced to miss recent practices because of severe back pain and a herniated disk, ESPN reported. He has suffered with back pain for years but the pain became unbearable during a recent scrimmage game.

Freeze said he pushed through the pain that day but by the next morning, he could barely walk. “We had to call the ambulance to come get me,” he said, according to ESPN.

When Freeze told Liberty President Jerry Falwell, Jr. about his excruciating pain, Falwell called HUD Secretary and renowned neurosurgeon Ben Carson. The decision was made to transfer Freeze to the University of Virginia Medical Center and Falwell sent the Liberty plane to bring in a specialist from Arizona.

“The doctors told me if it had been another 24 hours, that strand of bacteria could have gotten to my heart and that I would have been fighting for my life,” Freeze told ESPN. “It’s the way God works because there’s no doubt that bacteria would have killed me if President Falwell wasn’t so quick to make sure we got the right people involved.”

“I was crippled, I couldn’t stand up,” he added. “I’m blessed that I had so many brilliant medical minds coming together to help. I didn’t even know at the time how much trouble I was in.”

Freeze, who will remain in the hospital for several more days, has been communicating with his staff by phone and plans to address the team via Skype to update them on his condition.

He said he’ll have to coach from a golf cart when he gets out of the hospital and may have to coach Liberty’s first game at the end of the month from the booth.

“The Liberty people have been incredible, and my staff has been incredible,” Freeze said, according to ESPN. “I don’t think God wastes anything. I was miserable sitting here in this bed, but it reminded me how grateful I am to have this opportunity.”

The Liberty job offers a shot at redemption for Freeze. He left a previous coaching job at the University of Mississippi in 2017 after it was discovered he had used his work phone to call the number for a female escort service. In his five years at Ole Miss, he had led the team to a Sugar Bowl victory.